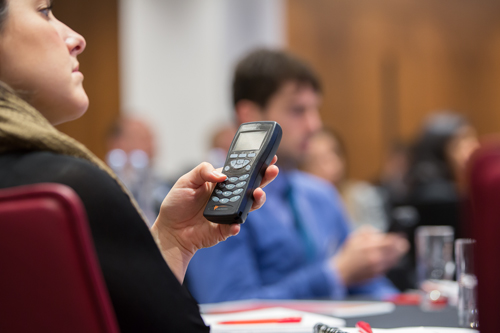 Mobile event apps have stormed onto the scene over the last few years. The rise of the smart phone has led to the almost universally held belief that they can supplant dedicated devices completely and will be better on all levels.

More than a hundred providers appeared in the market and they are all hungry for your business.

In some respects they are right. There are undoubtedly many more things you can do with a smart phone than you can do with an electronic voting keypad. Agendas, speaker biographies, messaging are all features that are not even possible on most dedicated hardware. The fact that many delegates are bringing this technology with them to the event anyway means it surely makes sense to use that instead of foisting another piece of equipment on them.

However I would argue that the instant polling device they were brought in to replace is still much better at polling. In some respects it’s a bit of an unfair comparison. Polling devices are designed to do just that whereas smart phones are the jack of all trades. With one USB connection we can talk to, control and get responses from, thousands of devices instantly. No downloads, no pesky WiFi or internet connections, no ‘permissions’ and everyone has the same opportunity to participate.

And that opportunity to participate is one of the founding reasons interactivity was brought into events in the first place over 30 years ago. The possibility of being able to include everyone in the conference, to be able to canvass and quantify people’s opinions and knowledge around a particular topic was, and I would argue is still, very attractive. The idea was also of a ‘level playing field’ where even the most shy could express their opinion easily.

We spent a lot of time developing software that could leverage real value out of the data generated allowing clients truly insightful conclusions from their voting sessions. We combined live data with external data, custom analyses took place to interpret the votes and aggregate responses were displayed straight back to the audience in real time.

Why is full participation not so important now?

Firstly, I think there has been a “dumbing down” of voting over the last few years, with many of the cheap voting systems being offered without technical support relying on the organisers themselves to run them. Inevitably this resulted in only the simplest opinion-type voting being used and many of the questions being frivolous or for fun.

Partly as a result of this, I think mobile event app providers have put less of an emphasis on making tools for polling. For example, many do not allow simple quizzes with scoreboards, or even a comparison style vote for gauging changes in opinion with a ‘before’ and ‘after’ type scenario. This last feature is I would argue one of the most useful and revealing features in a polling system.

It’s interesting that in a world where we are now looking to investigate and analyse as much data as we can to learn from our events to improve both them and our relationships with our delegates, that we are effectively ignoring a great opportunity to actually ask them for their opinion. Yes, we can do evaluation forms etc., but the beauty and simplicity of a poll where delegates with one touch of a button can register their opinion is being lost. 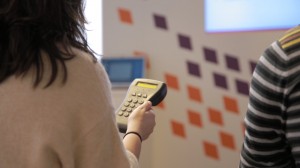 Inclusive voting with BYOD is impossible

In order for voting to be again inclusive we’d need to be able to control everyone’s smart phone and force them into a specific voting mode. However, you simply can’t do that. Even if all the phones were on and connected to the WiFi, you’d need to install a program that would effectively be classified as a virus!

This unfortunate set of circumstances means that the validity or usefulness of any data generated is lessened. We’ve often had clients who talk about engaging with ‘hard-to-reach’ parts of their audiences and it’s those parts that are least likely to use their smart phones for the polling.

In an extreme example, we’ve seen fewer than 30 votes from an audience of 500 using smart phones. With a dedicated device I am sure we would have got at least 300 – and that’s a conservative estimate. Unless you work for a cosmetics company (have you ever seen the disclaimers on their adverts – “93% of 27 women agree”??) then you’ll have to concur that polling with a smart phone is not inclusive and loses a lot of its relevancy.

I would have to say a resounding no. It’s just that the technology we are being told we should use at events might not be the best suited for it. In other words, if you really want to poll your audience and ask their opinion, then don’t be afraid to use a dedicated device – be it a keypad or tablet.

And if you are using people’s own smart phone, just don’t expect the results to be as good.

Would you like to learn more about electronic voting?